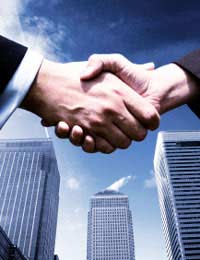 After a company merger it's common for directors of the company - or heads of divisions if it's a large company - to make a speech to motivate staff and explain the details of the merger. The difference between a merger and a takeover is that both the companies consider themselves equal in the transaction.

It is rare to find a merger that is truly equal on both sides, usually one partner is dominant in some way. But you can have situations where the partners dominate in different areas. For example one company might be dominant in cash reserves while the other is dominant is market position or territorial coverage.

In these situations it will often suit the boards and directors of the two companies to refer to the deal as a merger to make the world at large and the companies' staff see it as a joining of two companies where neither will have the upper hand.

Introduction to a Speech After a Company Merger

One of the common factors of company mergers is that they are usually voluntary, it's unheard of to have a hostile merger, that would by definition be a takeover. Another distinction of a merger is that both the companies involved cease to exist and a new one is created for the new company.

Example: We have both put XX million into making sure that this merger works. In the current economic environment we need to be strong, and both companies realised that we would become stronger as a result of this merger.

Reassure staff of the beneficial aspects of the merger and ensure that, as with other speeches that aim to motivate, that 'we' is heard more than 'I' or 'you'. Of course, what you say will depend on the reasons behind the merger.

The reasons are usually because the two companies complement each other. They might have complementary products, or similar products in complementary geographic regions, for example. In an economic downturn it could be that two companies are joining together for protection from other competitors.

Example: There will be a larger pool of jobs and opportunities for you in different product/regional areas. We will be stronger as a result of this union.

People aren’t stupid and more experienced staff will be expecting 'rationalisation', job cuts in plain English, arising from the doubling up of staff in many areas. Be ready for this one and if there are already plans to lay some staff off but they have not yet been released, you will have to bluff it out. Example: There will be more places to work and more job opportunities after this merger so it will be a positive move for everyone (note the use of 'will' as opposed to 'should' or could' – use strong positive words rather than woolly ones). No one is talking about redundancies, we will be assessing the need for staff in all areas an at all levels and the last thing we want to do is lose any of our valuable and talented workforce.