Home > Work Difficulties > Speech After a Strike or Dispute Has Ended

Speech After a Strike or Dispute Has Ended 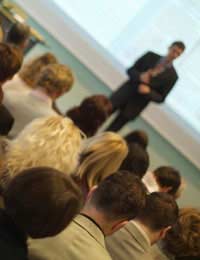 Any speech delivered after a dispute or strike has ended needs great care. The approach will differ depending on which side is considered to have 'won', if any. But the reality is that either way the dispute will have caused problems which are likely to be deep seated and cause bad feeling for some time to come.

Even the greatest orator will not be able to resolve problems left behind after a strike or dispute with just one speech. There will need to be a concerted effort by all management to act in a concerted way to get things back to normal as soon as possible. But an open address to everyone in a company can do a great deal of good, as long as fits in with the overall strategy to get relationships back on track.

The best way to deal with bad feelings is to get them out into the open. Thank people for returning after the strike and ask them to listen to you for however long you need. But bear in mind that if any situation needs a short and pithy speech, it's this one.

Example: We will all have to do our best to get the company back to a point where it is healthy and prosperous. I'm going to ask you all to help me do that.

The Guts of the Speech

This is where you tell people how you expect them to get the company back to working efficiently. It's one thing to ask them but many people will need clear directions.

What you actually say will depend on the situation. If, for example, the dispute was about health and safety and steps have been taken to make the workplace safer, you can ask people to let you know if they spot any more potential hazards. Of course there's a chance you'll then be inundated with spurious claims, but that's a risk you have to take.

If the strike was about pay and conditions then you can't take that tack. It's almost certain that both sides will have come out of it feeling that they've had to give ground so you'll have to appeal to everyone to try and get on with working as best they can. In these articles the importance of using 'we' and 'our' instead of 'I' and 'mine' is often stressed, and it is never more critical that in this speech.

Example: I will be putting every effort possible into getting back to a decent working atmosphere and I ask every single one of you to do your best to help each other do the same. There will be times when we will all have to bite our tongues and say what we know will make the situation better instead of what our instincts make us want to say.

There's not much else you can add to a speech like this except to round it off in a positive way. But if the atmosphere is right for it you can make it plain that anyone can come to you if they have particular problems. In a manufacturing plant, for example, there might be a lot of work to do to get machinery back online and extra labour or different work patterns might speed that up.

Example: If you need something out of the ordinary to help get work back on schedule, anyone, management or staff, can come and talk to me about what they need. Now that's enough from me, let's all get back to work.

Speech to a Team After a Member Has Been Fired

Speech to Your Team After Issues With Headhunters

Speech to Staff About Impending Redundancies