Speech to Staff After Selling a Company 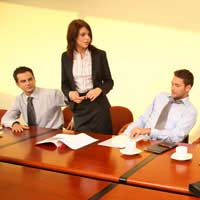 Not many of us will ever get to deliver this speech, given to staff after selling a company. But if the statistics are to be believed we are increasingly starting our own companies in the UK as a serious alternative to being employed, particularly when it comes to working from home.

Be clear about whether you’ll need this speech or not!

So the number of people who could be in a position to deliver this speech could go up significantly in the decades to come. And if you are starting up your own business and haven’t thought through about what you are going to do in the future, then it’s time to think about it now.

Knowing what your ultimate end goal is, whether you’re simply going to wind the company down when you’ve had enough, or build it to a point where you can sell it off and retire without having to worry about money, really changes the way that you work on the company and how you build it.

Having got to the point where the company is about to be sold, what you are going to say to your staff will depend on the scenario. Are you staying on, either permanently or for a handover period, or are you going to leave straight away? Are the new owners going to make a lot of changes or have you made the sales contract subject to certain clauses about not making changes?

Of course this governs what you are going to say to staff but the main thing, particularly if there are holdover or earn-out clauses. These mean you may get more money or shares after a while, if certain conditions or targets are met. If this is the case then you’ll have even more reason to keep the staff motivated.

Be clear about the situation

Bear in mind that many of your staff may not have been through this situation before. A change in ownership of a company, whatever the arrangement, can make people very fearful of their position and future.Example: Although the company is being sold and the new owners will ultimately be making the big decisions, I will be staying on as managing director for the next year while they learn about you and the business, and I won’ be without influence during that time.

Give reassurance to staff

Once that’s out of the way you need to reassure staff that their futures are safe, or at least to what extent. If you have made conditions in the sale that affect staff, let them know.Example: I know that many of you are concerned that there may be significant changes here and I can’t say that won’t happen eventually. But I can say that I have built a clause into the contract that prevents relocation of your office for the next twelve months. Having said that, this sale will now open up opportunities in other areas of the company for those of you who are able to relocate, so don’t close your eyes to those opportunities.

Finish on a high note

What you tell the staff on an occasion like this can make a huge difference to their morale and the performance of the company as a whole in the days after you’ve gone. Urge people to look forward, not back.Example: I’m proud of what’s been achieved by this business this company and it’s as a result of everyone’s hard work. There’s no reason why you shouldn’t be able to grow and improve on that now that I’m out of the way (pause for laughter, hopefully). You have more control over what happens next than you realise, and those who takes this cache and prove their worth can go even further in this new arrangement.

Don’t forget to end by thanking everyone for all their work and effort during your tenure.

What to Do When Things Go Wrong During a Speech

Using Your Voice: Tips for Projection and Modulation

Speaking Without Cue Cards or Notes